Focusing on their talents, Dicom offers each employee a career progression in line with their goals. Discover some of these motivating career paths! 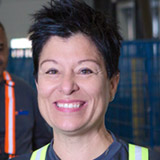 Marie-Josée
Mondor
The Importance of the Human Side

Marie-Josée was hired in November 2015 as a Marker. Her role was to identify parcels in order to ensure the perfect coordination of shipments. Her natural sense of leadership, her charisma, and her approachability made her the right candidate to advance to her next role as Team Lead.

Before joining Dicom Transportation Group, Marie-Josée worked in a school environment mentoring children within the special needs program. It was after a professional reorientation that she had the desire to change working environments so that she could do more physical work while remaining closer to people, that is both employees and customers!

Before working at Dicom, she was a manager for a company in the retail industry. “I quit the organization as it was important for me that the business had the employee’s best interest at heart. I found the “Human Side” as soon as I started working at Dicom.”

What creates success for the team in Blainville, according to her, is teamwork. “For us, no one is restricted by his or her position, no one is uncompromising or hung up on their job title. Whether you are a Sorter, Marker, Team Lead, Operator, Driver or even an Independent Contractor, if someone needs help, without even asking, other employees will stop their own tasks and join in to help the team succeed.” 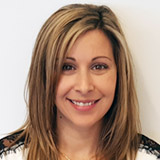 “What I like most about working at Dicom is that we are a family!” exclaimed Isabelle Hayden, Team Leader, Dedicated Customer Experience, who joined Dicom in 2004. Isabelle started off in the pick-up department and steadily climbed the ranks. She has worked in several departments, including freight and research.

In 2016, her determination and dedication paid off and she became team leader of an 11-strong team of customer service agents assigned to major accounts. Her main responsibilities include coaching, problem solving and achieving targets. “My team motivate me,” she added. “Each customer service agent receives a minimum of 200 emails a day. We share a great feeling of satisfaction when we have dealt with all the queries by the end of the day!”

Dicom has helped Isabelle Hayden’s professional development via continuing education and work-life balance measures. “As I built up my career, I had two children. Since I live in the South Shore and the office was in Côte-Saint-Paul, Dicom set me up with a home office for five years. I’m not just an employee number. I’m a member of the Dicom family.”

Isabelle Hayden is proud of her career development and happy to continue on this path within the company. “Dicom gave me the tools I needed for the role I have taken on. I feel that the company supports me and helps me climb higher so that I can make my dreams come true.” 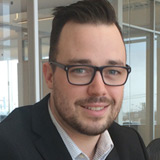 At 28 years old, Antony Voyer, CPA, CMA, and Vice-President, Corporate Finance & Treasury at the Dicom Group, is now one of the company’s youngest managers, whose career has been marked by grit and determination.

Antony’s adventure at Dicom began in 2010 as an Administrative Clerk after graduating with a Bachelor of Finance. His ease and speed at completing his tasks was noticed by the VP of Finance, who offered him the position of Fleet and Maintenance Analyst for the GoJIT division at the time. Three years later, with a Bachelor of Business Administration under his belt and CPA certification underway, Antony was promoted to Dicom Freight Analyst at the group’s headquarters. The following year, after earning his accounting certification, he became Senior Financial Analyst before being promoted to Senior Manager of Corporate Finance in 2016.

“Whenever I had the chance to advance, I threw myself at the opportunity, and it paid off!” says Antony, who treats facing challenges and learning constantly as an integral part of who he is.

“I believe strongly that working hard with a positive attitude founded on mutual aid leads to better performance and drives projects forward,” adds Antony, who also emphasizes the coaching he received from his direct reports and co-workers. “I had the opportunity to work collaboratively with people whom I respect and admire. Sharing knowledge and experience this way helped me push my boundaries,” says Antony.

The dedicated manager keeps balance in his personal life by focusing on family and friends, as well as on sports, which allow him to unwind and make everyday use of the principles of perseverance, discipline, and teamwork. These are just some of the values that have forged Antony’s career, and they’ll take him as far as his ambitions go! 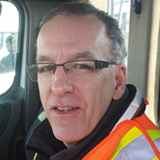 For 32 years, René Lemaire has been running the roads as a truck driver, a job that began calling his name in the early 80s when he was working for Honeywell Controls. “The company had several trucks and even back then, I was envious of the drivers,” recalls the 56-year-old Saint-Jérôme native, whose first job was as a courier for an engineering firm.

The trucking enthusiast’s dream came true in 1985, when he joined Dicom, a company that’s become like a family to him. He explains: “Whenever there’s a problem here, everyone helps each other out. Management listens to the employees, and you can always ask a more experienced co-worker for advice if you’re not sure about something.”

When he first started at Dicom, René was assigned the Toronto route with another driver from Montréal. “We’d spend our weekends in Toronto. It was great—I was young and single!” he laughs. Nowadays, his route takes him to Port Hope, Ontario, half an hour from Oshawa, between 5:30 p.m. and 5:30 a.m. every night—a schedule that suits the night owl to a tee. “If there’s one thing I’m not, it’s an early bird! You need to be disciplined to work nights, but most of all, you can’t be afraid to be alone,” he explains.

When he’s not behind the wheel hauling merchandise, mostly for L’Oréal, René likes to go to antique car shows with his wife or tinker with his vintage 1986 Mustang convertible. But, every day, he treasures the opportunity to do a job he’s always wanted to do, for a company as highly respected as Dicom. “I started driving trucks when I was 25 years old. I feel very lucky to still be here today,” he concludes.

Claude
Julien
The call of the road

“I love my job just as much now as the day I first started, and even more, if that’s possible!” exclaims Claude Julien, 55, a Dicom truck driver since 1983. Claude first heard about the company from a family friend in Rouyn-Noranda, where he was spending Christmas with his relatives. “My uncle’s friend was a truck driver and he told me that Dicom was looking for a driver for northern Ontario. A few days later, I was hired!” he says.

Just 21 years old at the time, Claude was a forerunner of sorts in a vast territory that had yet to be tapped by Dicom. Himself a native of Chelmsford, a small town near Sudbury, Claude started driving routes in North Bay, Timmins, Sault-Sainte-Marie, and even Thunder Bay, delivering mainly to banks and credit unions.

After so many years on the road, there’s very little of Ontario that the truck driver hasn’t seen. In fact, he drives back and forth between Montréal and Ottawa twice each night. “If there’s a hockey game on, I like to listen to it on the radio. Otherwise, I listen to the traffic stations. I have no choice, with all the construction and road closures going on in Montréal!” says Claude, who admits that he’s gotten to know Montréal even better than Ottawa because of all the detours. One thing is certain: Patience and resourcefulness are essential qualities in this job. “A lot of drivers get very impatient when they get stuck in an accident. Not me. You always have to think about other people when you’re driving, and my mechanical skills come in handy whenever I run into a problem,” he points out.

Claude can cover up to 200,000 km each year in his truck, but that doesn’t stop him from road-tripping all over Canada in his spare time, to places like the Gaspé peninsula, the Laurentians, and New Brunswick. For 34 years now, Dicom has satisfied his wanderlust, which Claude hopes to someday pass on to the younger generation. “Dicom is like a big family to me,” he says. “I see myself doing this job for at least another ten years. I’ve become somewhat of a mentor. The young drivers who are just starting out feel comfortable walking up to me with their questions. I hope that they’ll eventually come to love this job as much as I do!”